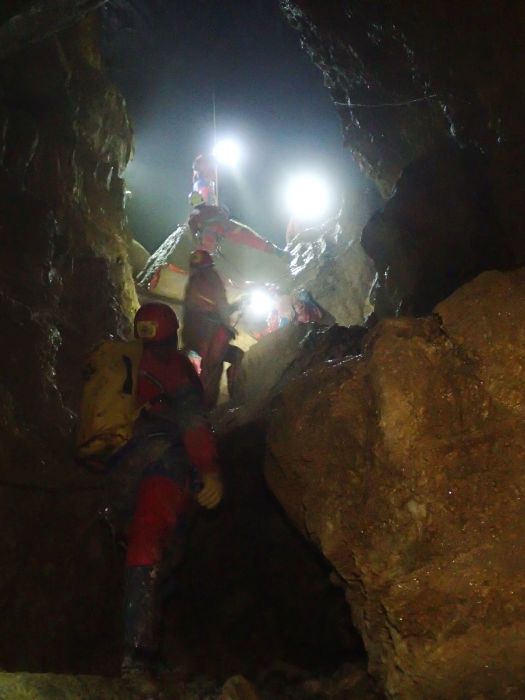 As a member of the ECRA international organisation The Hungarian Cave Rescue Organisation was invited to the training. Almost all Slovenan cave rescuers, 3 Hungarian, 5 Serbian, 5 Bosnian and 1 person from Montenegro participated on the program. Alltogether 60 person were present.

The training was really excellent, the host organisation proved to be well-equipped, disciplined and exemplary also in logistical areas.

After arriving on Friday evening, greeting old friends, the real program began on Saturday Morning at 7 with wake up. The cave for the simulated rescuing consisted a 270 m deep vertical after that a 300 m long horizontal part. It was divided into 9 parts, each of them had its own group with a leader person. This information was absolutely clear in the rescue plan, which was visible at the leader tent on a table.

The leaders were Slovenian people, but the members of groups came from different countries. Two people of us were in the group 6, they did a counter-weight moving of the strecher in the bottom part of a 80 m pitch. One person was the member of group 3, he did the rope-rigging of the bottom horisontal part. The Slovenian cavers installed phone-stations in all 9 parts of the cave.This enabled us to keep a very useful connection between the groups and with the surface. For each group it was mandatory to give a call when they passed a phone station, so the leaders on the surface were able to follow the rescue process. Three heating point was installed in the horizontal part of the cave (only for practice). In the vertical part the transport was quite fluent, it was evident, that all colleges are well educated and only minimal technical differences were between the different organisations, but practically there were no communication problems. The Hungarian rescue people were at the same level as the other groups, also in technical and in practical areas. Alltogether on the training there was a successful, positive cooperation, we were glad to take part on it.

Thanks for the invitation.